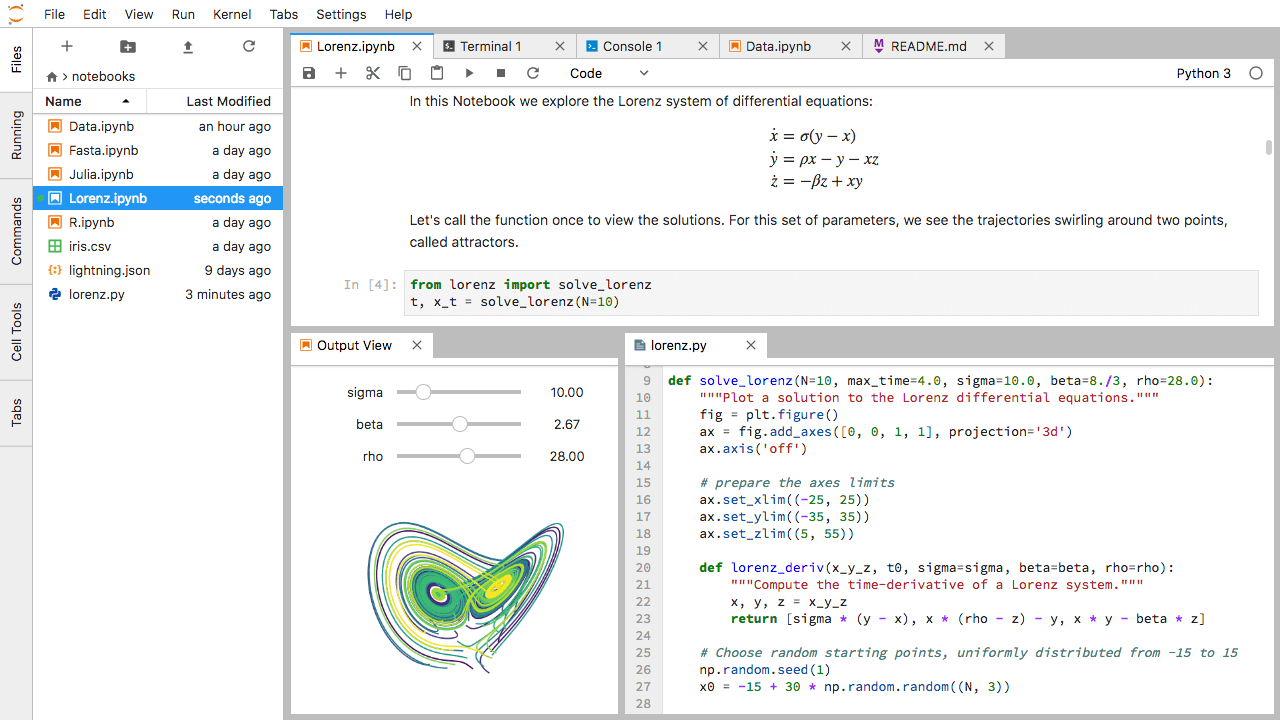 Jupyter Lab is a very useful tool to write Python code. I use it all the time when I'm starting a new project. It's also a good way to present something you're working on and add notes next to your code. This post will help you setup Jupyter Lab with various kernels and widgets, so that your productivity increases. 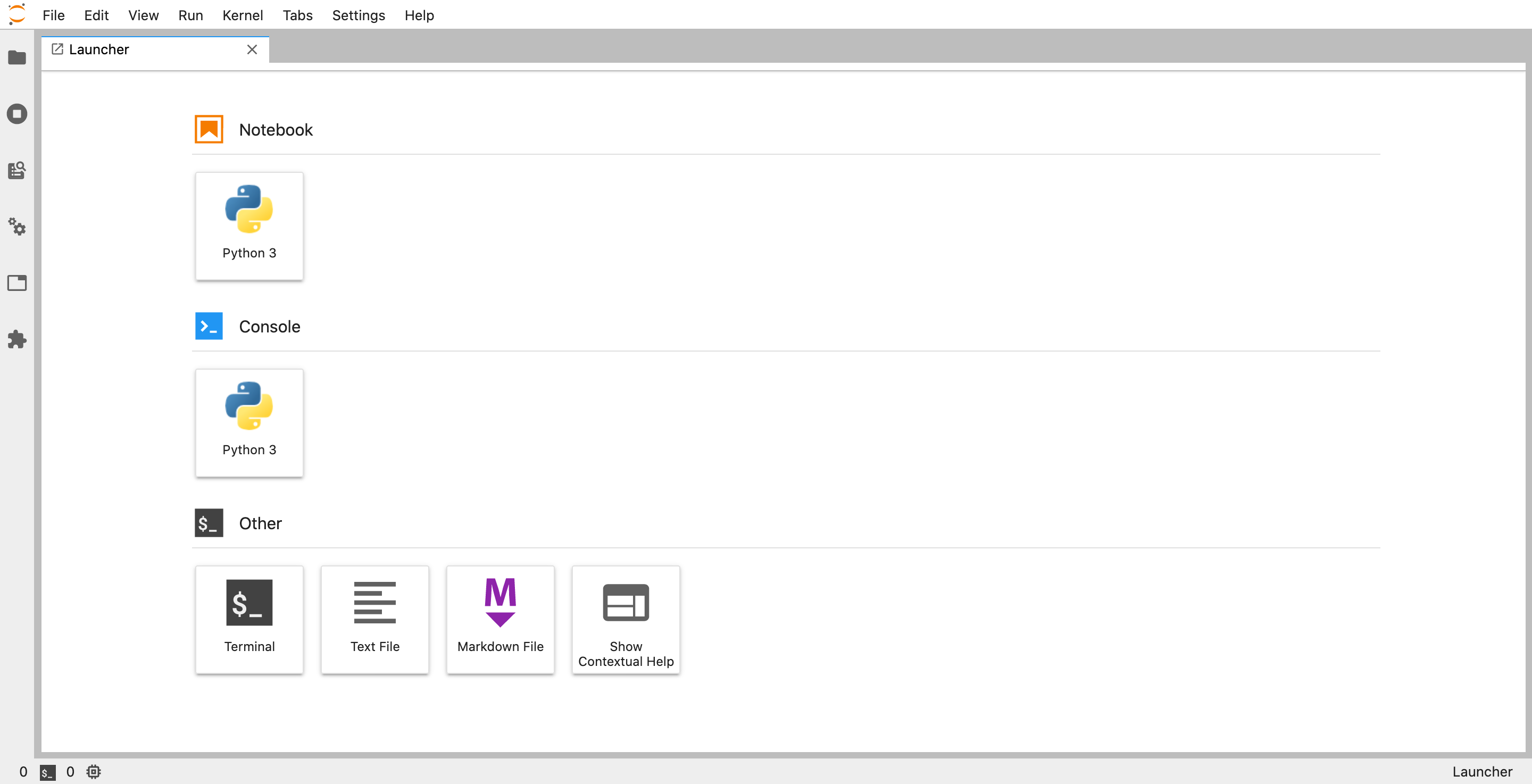 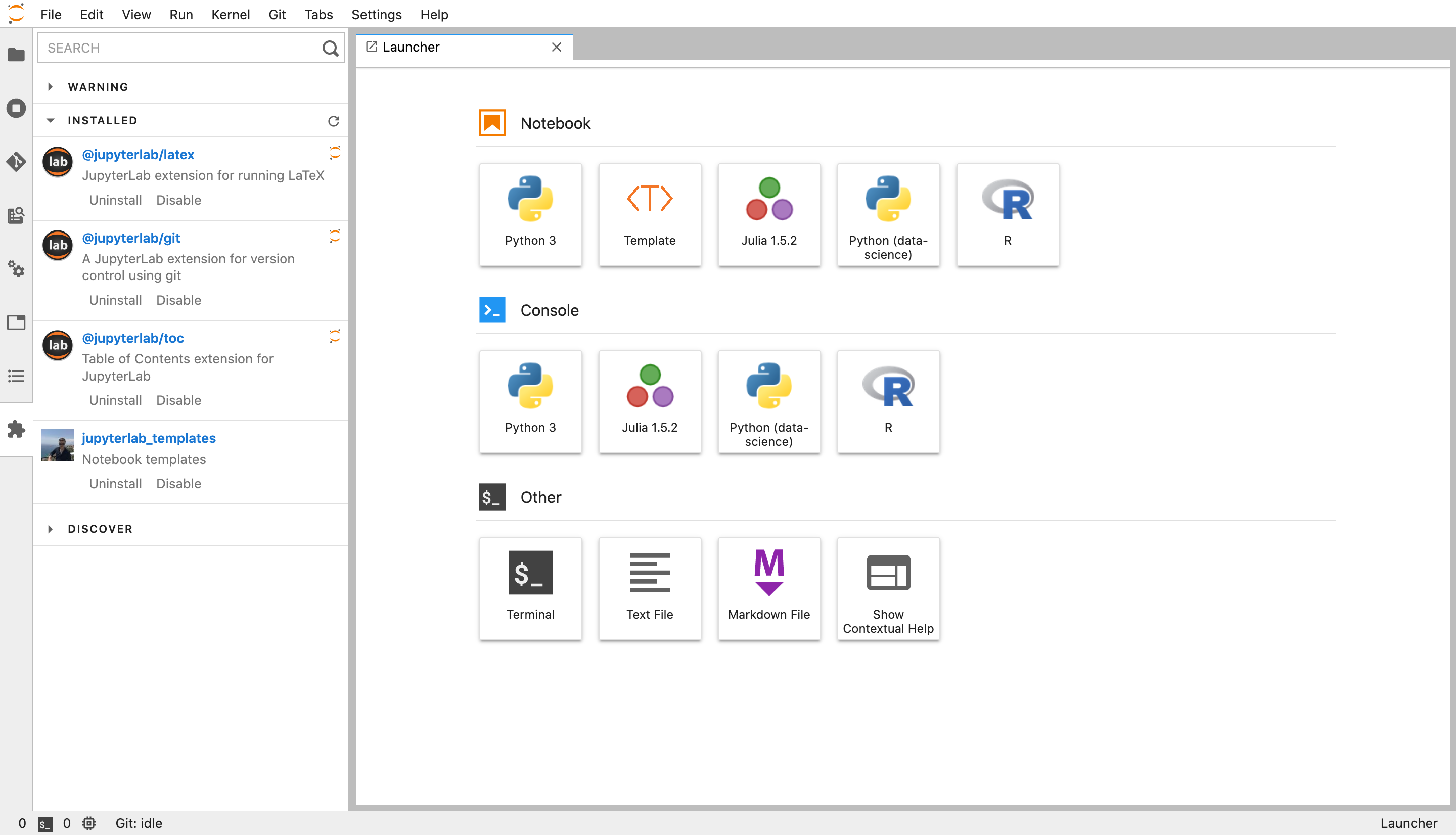 Note: I prefer to launch it in the background with tmux:

It’s even cooler to use aliases, in your .zshrc (or .bashrc ), append:

Then launch jupyter with:

Attach to the session with:

Jupyter comes with a default Python kernel, the one installed on your computer. This is a good start but you might want to use different python environments (if you’re used to working with virtualenv for instance) with different python versions or librairies. You might also want to use Jupyter Lab with other programming languages, like R or Julia. If that sounds appealing to you, look no further, we are going to install kernels !

The installed kernels will be located under $HOME/Library/Jupyter/kernels.

Python kernel from a virtual environment

Let’s first add Python kernels to Jupyter Lab. I am going to assume you are familiar with virtual environments, if not you should refer to this tutorial: Pipenv & Virtual Environments.

Make sure you have virtualenv installed on your computer:

By following the same steps, here’s how to add a Python 2 kernel, for your legacy projects:

Now if you install libraries within one of these virtual environments, they will be available though the corresponding Jupyter Lab kernel. If you reload your Jupyter Lab interface, you should see something like this: 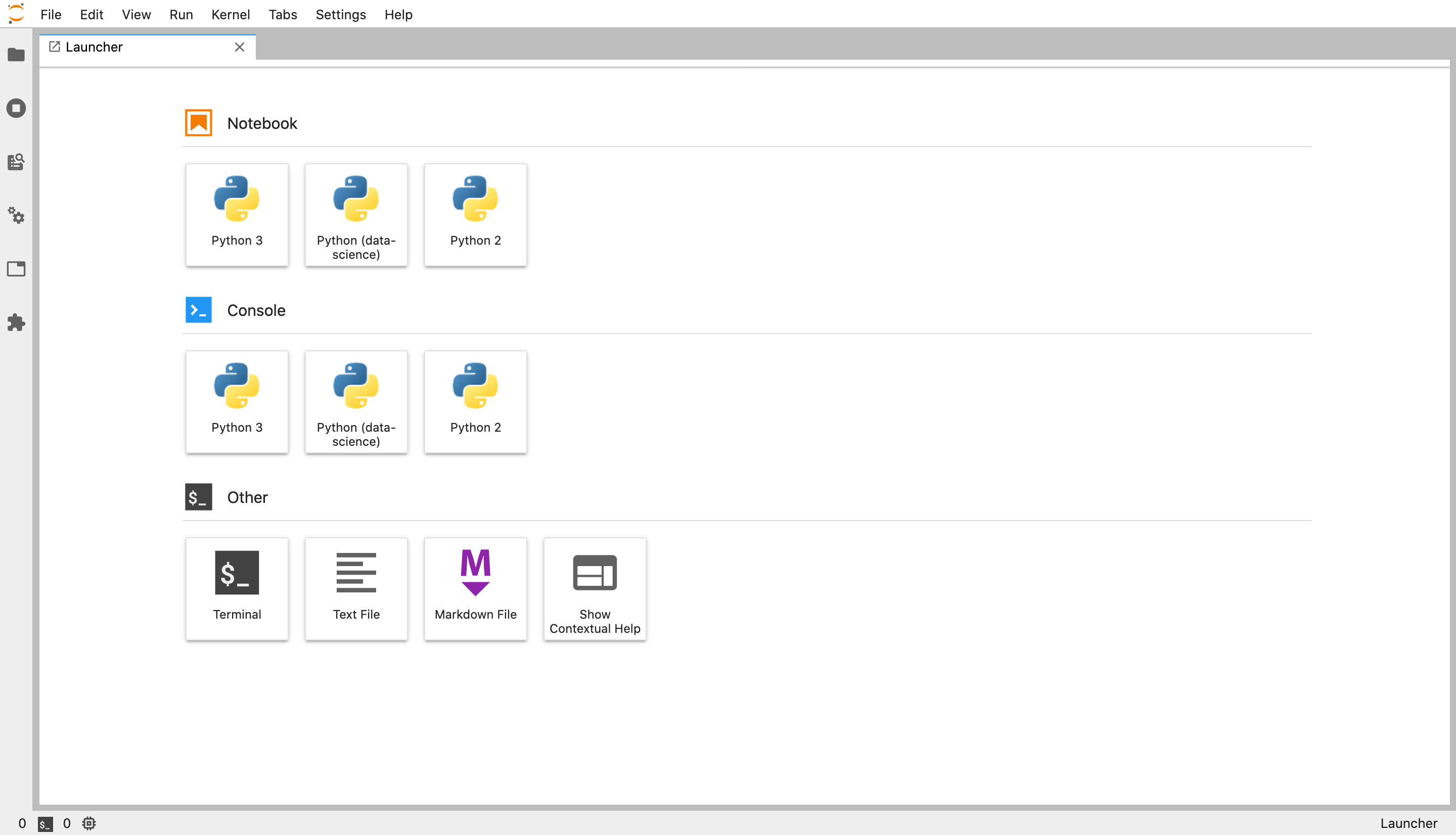 Here are some useful commands:

Kernels with other programming languages

The nice thing about Jupyter Lab is that you’re not limited to Python. Let’s see how to use other languages like R and Julia within notebooks.

Assuming you have R installed, run these lines in a terminal:

Reload Jupyter Lab and you should see this: 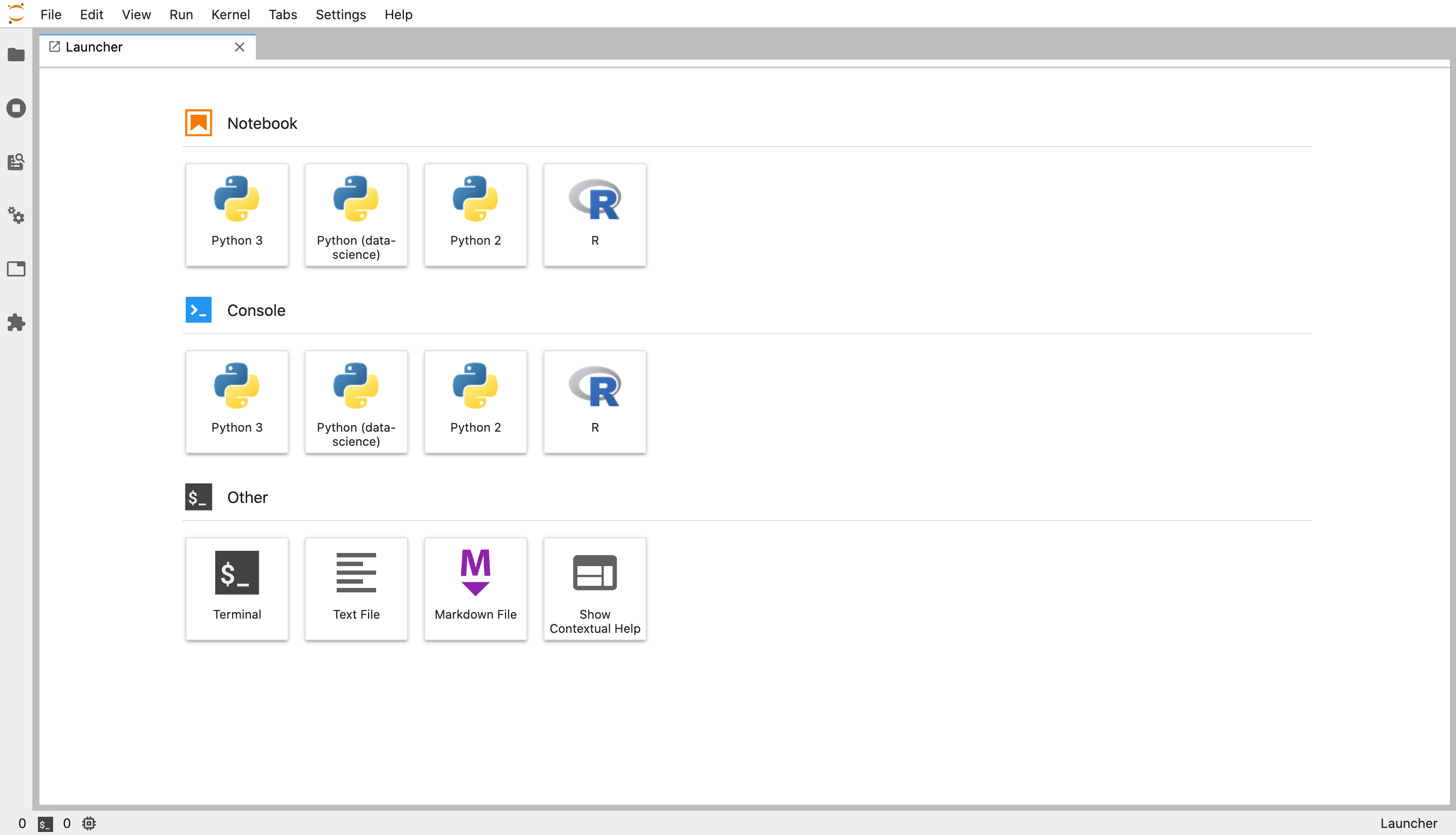 Nice, R kernel just appeared. Here’s another trick, you can actually write R code within a Python notebook. For this, you need to install the library rpy2:

Then, from a Python notebook cell, load the rpy2 extension:

You can now write R code within that cell! For instance: 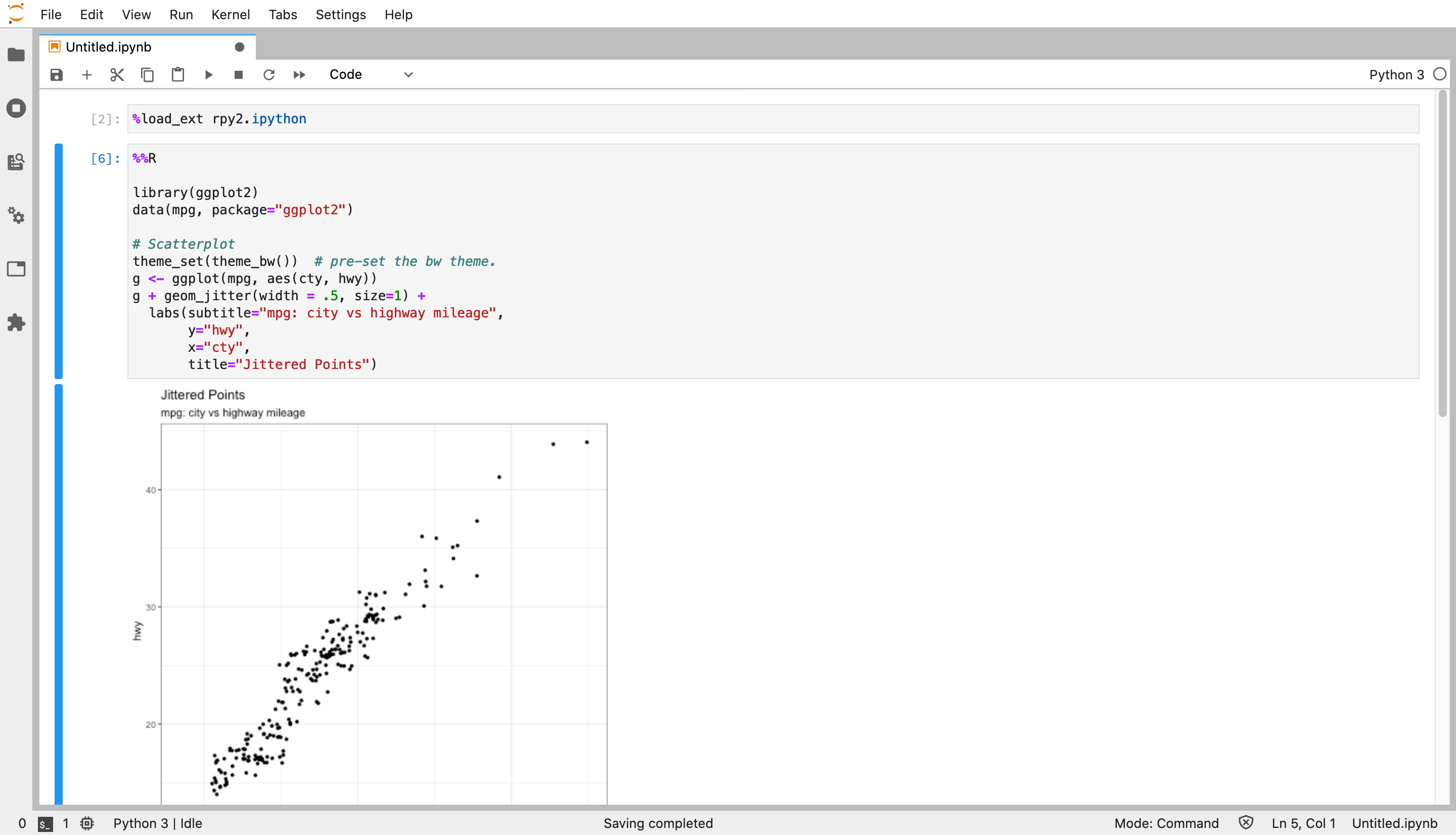 I have been recently introduced to the Julia programming language, and it seems very fun and powerful. Let’s create a Julia kernel, because why not ?

Assuming you have Julia installed, launch Julia from a terminal (just run Julia) and then type:

Reload Jupyter Lab as usual, and you should now see the new Julia kernel: 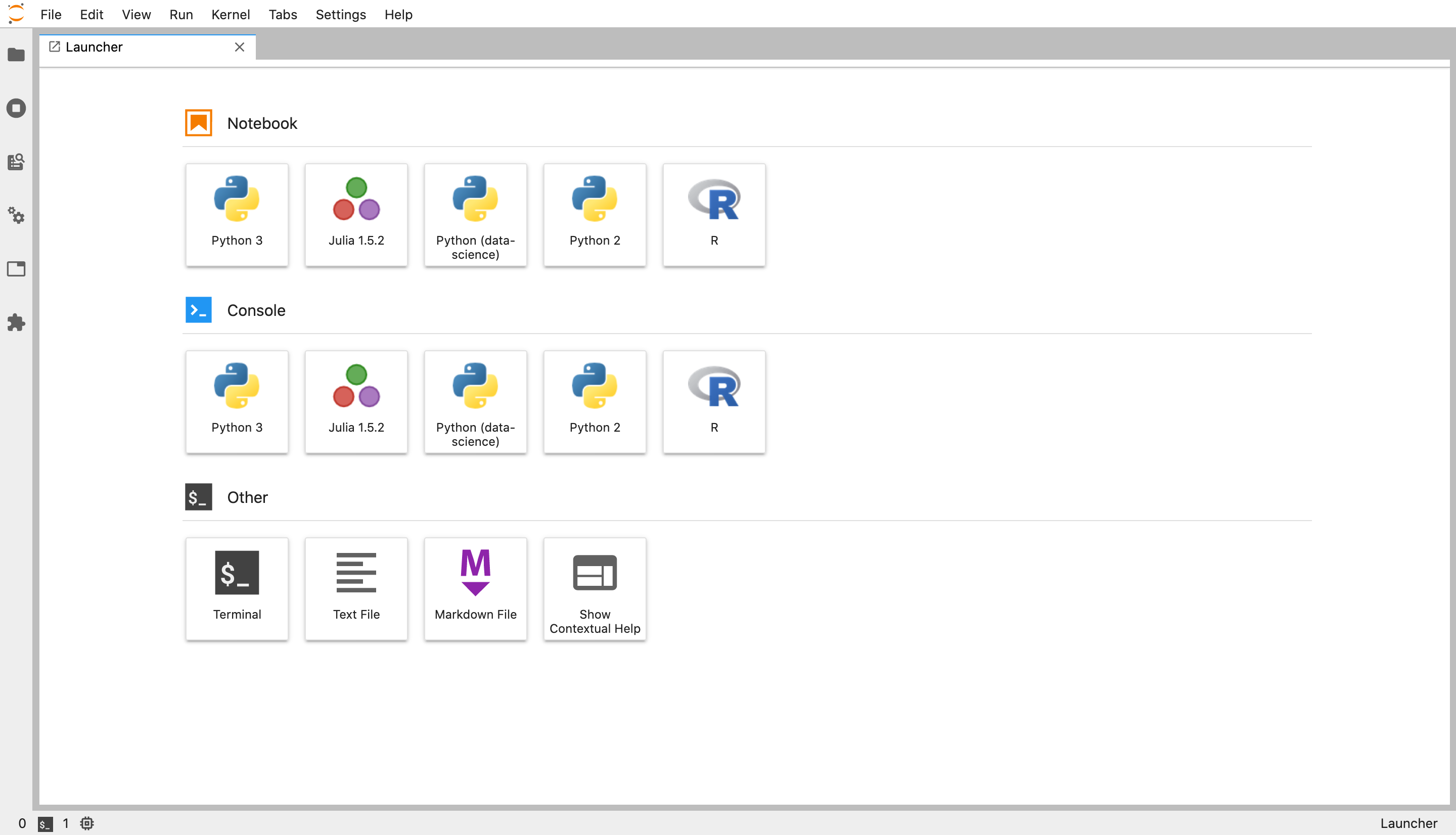 Note: you can either install extensions from the command line, or by using the “Extension Manager” tab within the Jupyter Lab user interface. I prefer the command line though, it’s easier to store my extensions and make a script to automatically install them.

As mentioned earlier, this widget generates a table of content from your notebook.

You’ll see a new tab appear, when you click on it, it’ll show the table of content. The sections are automatically created based on the markdown sections. Note that you can either enable automatic numbering or not. I did enable it on the following screenshot, and it looks like this: 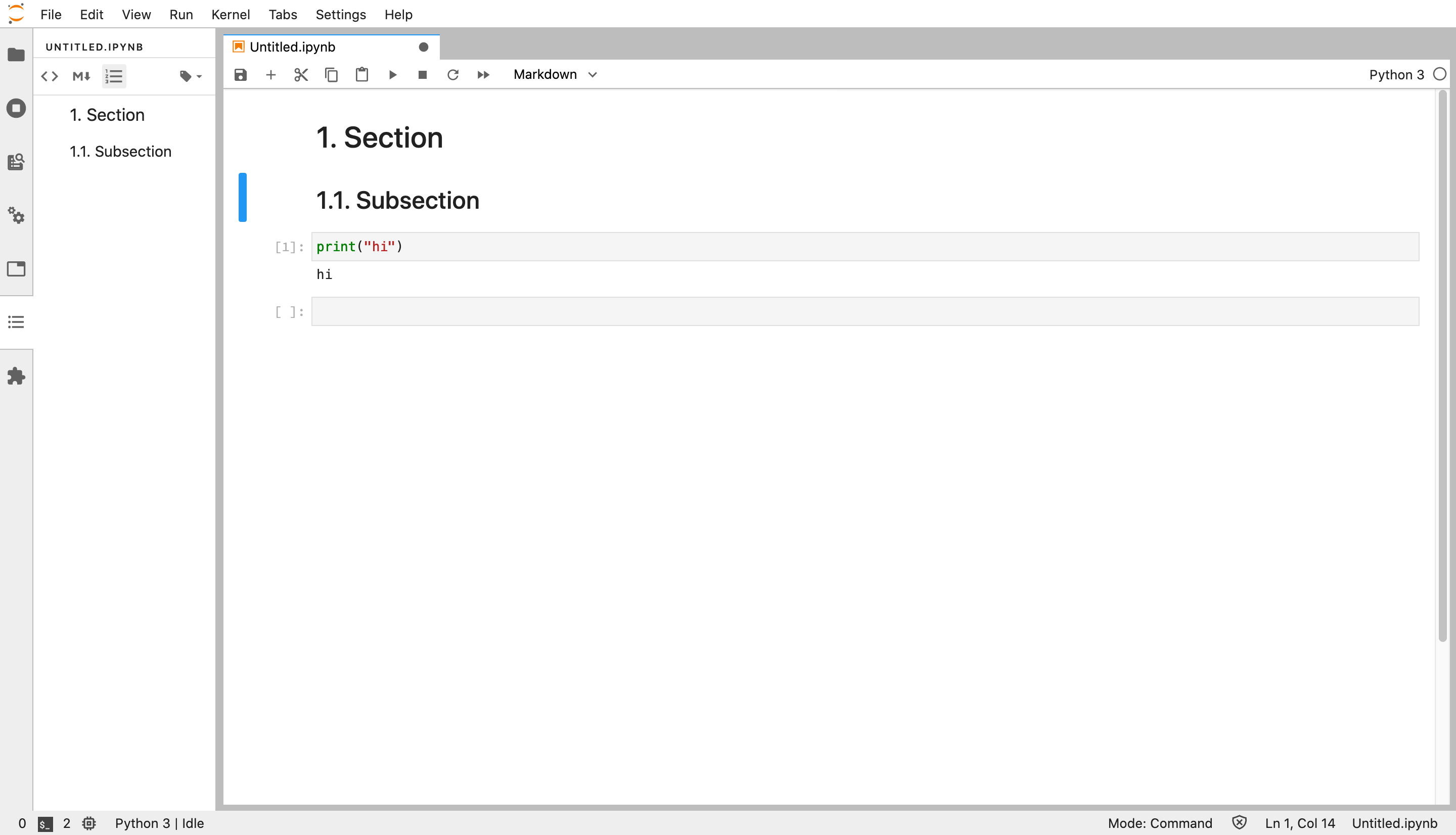 If you’re tired of running back and forth between your terminal and Jupyter Lab to commit your code, consider this extension that brings a Git interface to Jupyter Lab. Install it with:

As usual, a new tab appears: 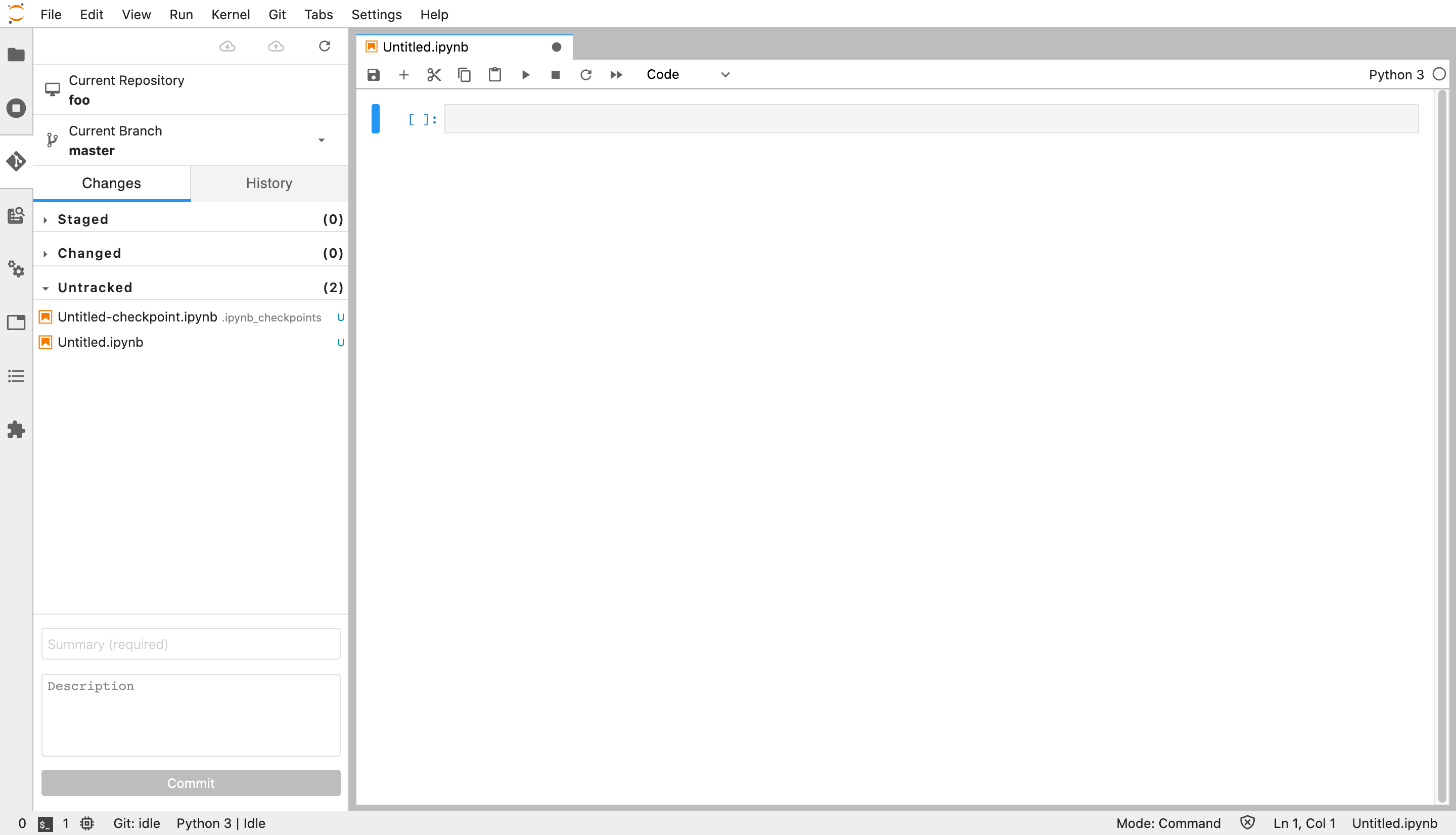 I mostly use overleaf for Latex, but if you’re not and if you wish to use Jupyter Lab for compiling Latex documents, this plugin will do the job. Install it with:

Now when you are editing a Latex file, a right click on the document will show an option that lets you render the file to pdf: 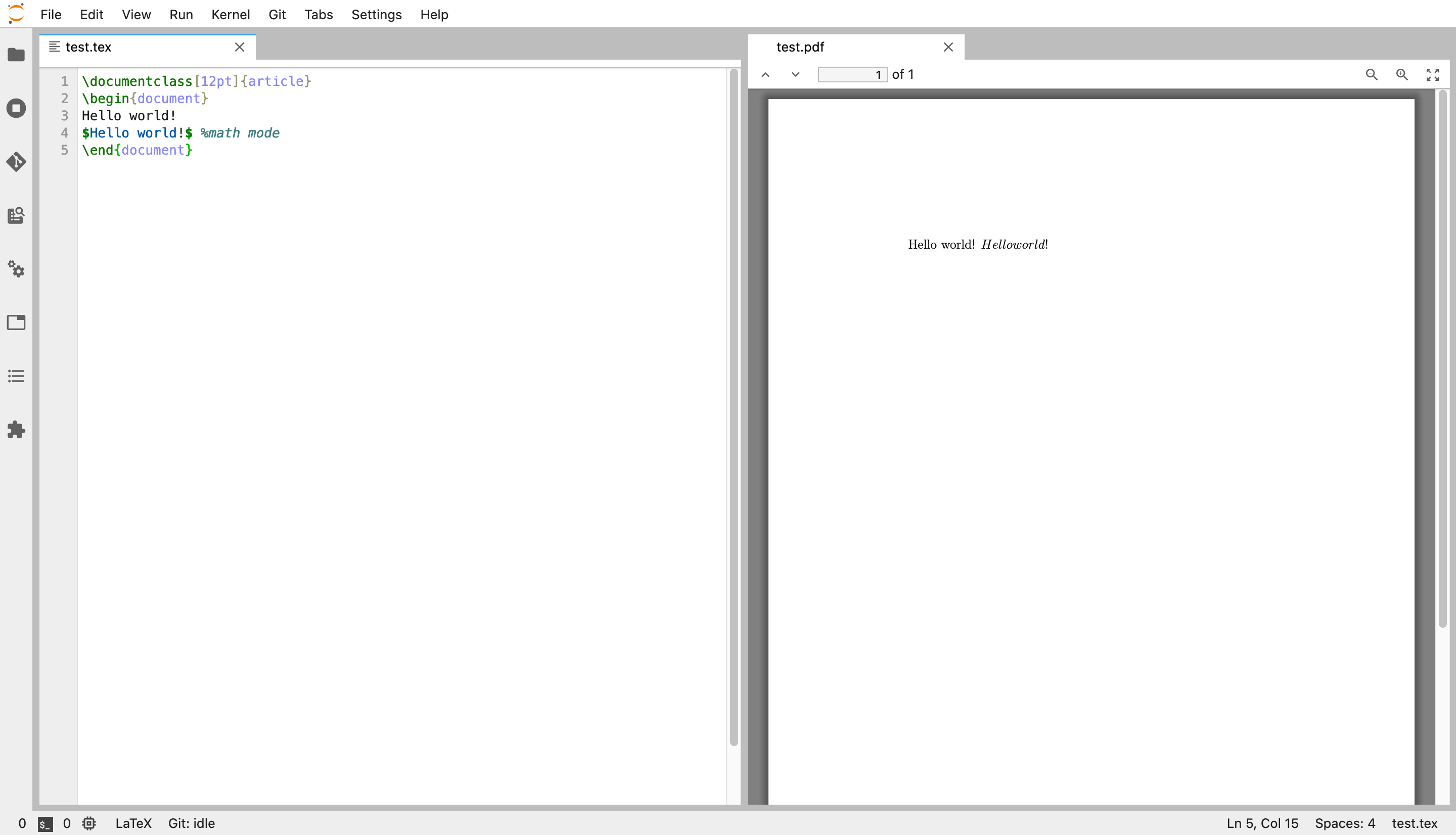 Sometimes you might feel like you always copy paste the same lines of code at the beginning of a new notebook. If you are, consider using notebook templates with this plugin. Install it with:

Then you will see a new “Template” icon next to your kernels. If you click on it, you will be asked which template you want to use, and it will create a notebook based on this template. You can create your own templates by saving notebooks in the template directory. You also get to choose which directory the plugin will pick the templates from. 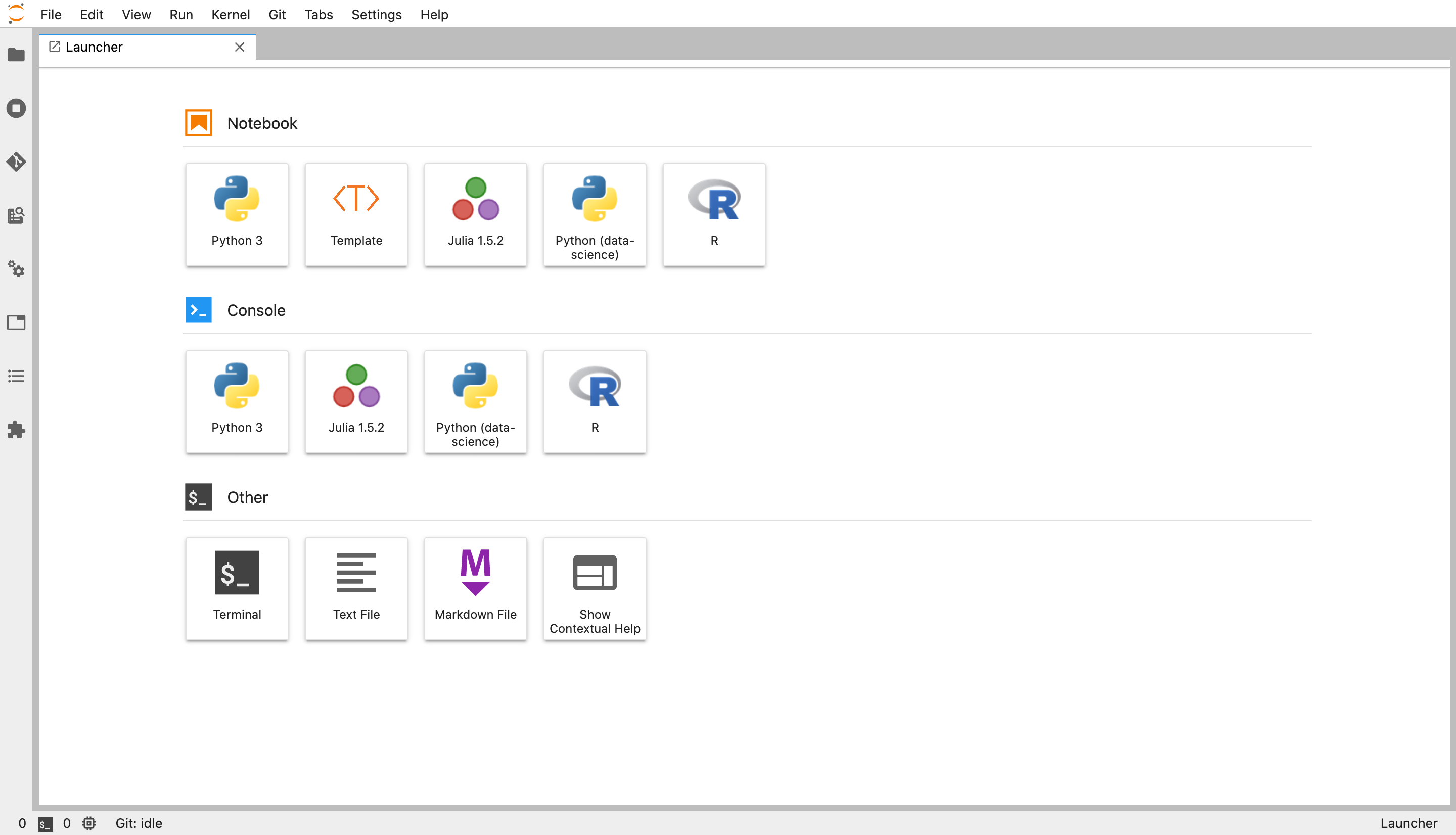 You know now how to setup Jupyter Lab and enhance it with kernels and widgets. There’s a lot more to it and I’d love to hear about what kernels and widgets you love. Feel free to reach out in the comments. I hope this tutorial was somehow helpful.

I have been playing guitar since 2004 and I started recording music videos on YouTube in 2009. In this post, I am going to explain how I record guitar tracks in my home studio. ...

Deploy Metabase with Docker and Nginx over HTTPS

Metabase is an open source dataviz application that lets you create analytics graphs and dashboards very easily. Let's see how to deploy Metabase over HTTPS by using Docker, Ngi...

Habits to be more productive and organized

I recently read a book about productivity and organization at work. More precisely about how to achieve the same amount of work in a smaller amount of time. It's french book cal...