An introduction to Git

A short introduction and tutorial to Git, the versionning tool created by Linus Torvalds.

Git was created by Linus Torvalds in 2005 for development of the Linux kernel, with other kernel developers contributing to its initial development. Its current maintainer since 2005 is Junio Hamano.

The name “git” was given by Linus Torvalds when he wrote the very first version. He described the tool as “the stupid content tracker” and the name as (depending on your way):

… Or clone an exisiting one

So far we have:

What we need to do:

Once a remote repository is created, we are provided its url. Then, tell the local repository what its remote url is.

Commit and push to the remote repository

Even though we tracked our file, we didn’t commit anything. When commiting, we provide a message explaining what we changes within the tracked files.

Now, we commited our change. Although, everything is still local, nothing is published on the remote repository yet. To do so, we must push our last commit.

To get the latest changes on remote, use pull command.

Display what has been changed since the last commit

Collaborating with other people

Co-workers work on the same project and can edit the same files simultaneously. Updates are pushed on the distant repository, and pulled from the production server.

NEVER EVER commit, push or edit anything on the production server.

Branches allow people to work on separate tasks without messing with the master branch code. It is useful to experiment, or add functionalities. Branches can start from the master branch, or from another branch. 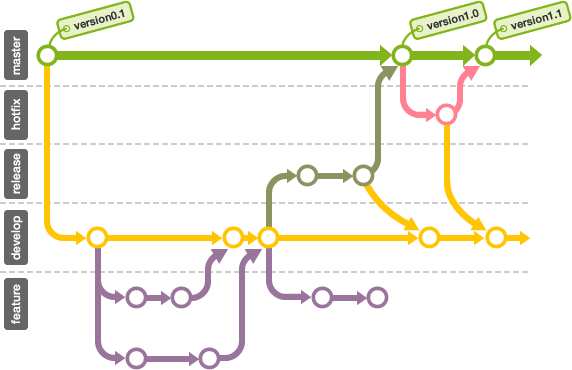 Create a branch named awesome-feature from the active branch

Edit some code, add and commit files. Then push them to the remote server, but not on master.

When we are finished working on our feature-branch, we must check for conflicts before pushing to master. To do so, pull the master branch into your branch, and fix your conflicts locally.

When all the conflicts are resolved, push again, still on your branch, to the remote repository. Then, make a pull request, that will eventually get merged on the master branch by the repository administrator.

When your git pull fails because you are editing a file that has been changed by someone else, temporarily stash your changes, pull the recent modifications, then apply your changes again.

Please never add anything other than code/configuration files in a git repository. This is not Google Drive.

Create a .gitignore file at the root of your repository, with the following content:

This tells git to never track .pyc or .csv files, because who needs to ?

You can also ignore entire directories. You should avoid using git add * if you’re not sure you’re ignoring unnecessary files.

Remove files on the repository

What if you no longer want to track something ?

Sometimes you want to track files that contain passwords, or configuration variables. Those files are likely to change independently from the code, so you don’t want to commit every single change in those. They might also contain sensitive information that you don’t want to store within the repository.

What you should is tracking a .dist version of the file that has all the required fields, but without any value.

Every repository should have a decent README.md file, explaining what it is about, and how to configure and install the dependencies to start the application. This file is written using the Markdown syntax. You can read about it and have look at this cheat sheet to get started.

Go ahead and do this tutorial if you have 15 minutes to spare: try.github.io

In this article we are going to learn how to draw maps using the R programming language and ggplot2 library. While I am mostly using Python for everything else, I must admit R p...

This tutorial is a starting point for everyone who wants to build a web application using Python Flask along with Bootstrap. Instead of importing Bootstrap from the CDN, I am in...

Jupyter Lab is a very useful tool to write Python code. I use it all the time when I'm starting a new project. It's also a good way to present something you're working on and ad...